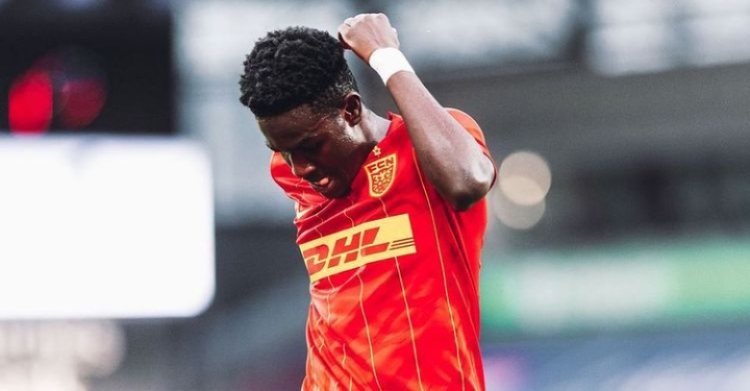 "The transfer window is always open in our club," we sometimes say, referring to our strong academies, which train talented football players and people who are always on the move for our first team. And now it's time to introduce another academy player to our 3F Superliga squad.

The name is Ernest Nuamah Appiah. The 18-year-old Ghanaian has joined the club in early January from Right to Dream and is a left-footed winger.

- Ernest is a very good boy. He is a quiet guy with a smile on his face, but he has some strong values ​​and he understands the responsibility and importance of delivering his best and working hard. I am sure that he will quickly adjust to Farum and has the potential to be able to make a difference in the long run.

- Football has always been very important to him, and it has always been his dream to become a professional football player. He has developed really well over the years and there are high hopes for him but no extra pressure will be put on him to perform from day one. We take our time, but we also believe that he can assert himself relatively quickly.

- It is always a pleasure when our own boys get the opportunity to take the next step in the pursuit of their dreams. We are proud of Ernest's development and we look forward to following him on the next chapter of his journey.

- Ernest is first and foremost a dribbler. He is incredibly fast, has a huge acceleration and a good agility . He is primarily left-footed, but can also use the right. He is a great individualist with a tremendous power, who has great potential to also become a skilled team player.

- He will join the squad as an offensive winger. He can both play on the right side, where he can pull in with his left leg, or he can break through on the left side and make posts. We have not really had a left-footed right wing in the squad since Andreas Skov Olsen, so Ernest can in the long run give us a new dimension in the game, as he can both go into the field and play at intervals, but also threaten deep on the last line.

- We have a really good knowledge of Ernest, therefore he also goes directly into the first team squad, because we expect that he can assert himself immediately. Of course, we need to look at how he gets used to it, and he also needs to continue to evolve and put on his game. We have followed Ernest's development for many years, and we have never been in doubt that he had the potential to end up in the Superliga squad.

- At Right to Dream, I have learned to adapt to new challenges and be thorough in my work. Expectations are high at the academy, so I have learned a lot over the years, which has helped me become a better football player and teammate.

- We collaborate between Right to Dream and FC Nordsjælland, so I know many of the players and people here in the club. It makes it easier to take this step. There is a lot of competition on the team and more talented players in my position, but I would like to contribute with renewed energy.

- It is a great opportunity for me and I am very much looking forward to it. Right now it's about getting playing time on the pitch and sticking to the team, but in the long run I would like to play FC Nordsjælland even higher up and fight for trophies.

- Of course I also have a long-term dream of playing European top football and becoming a role model for African football players, but first and foremost it is about seizing my chance here and giving back.

- I would like to thank all the staff, coaches and teammates at Right to Dream for the many good experiences we have had together the last eight years. It would not have been possible for me to get here without them because they have always helped me on and off the field.