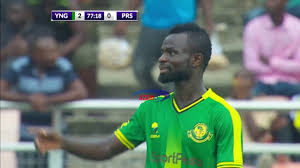 Ghanaian striker Bernard Morrison scored his first goal for Tanzanian outfit Yanga in their 2-0 win over Tanzanian Prisons in the Federation Cup.

The new signing converted a penalty in the 10th minute as a Prisons player handled the ball inside the box.

Morrison provided the assist for Yikpe Gislain to head past the goalkeeper for the second goal in the 64th minute,

The match was played at Uhuru National Stadium.

Yanga have now progressed to the Round of 16.