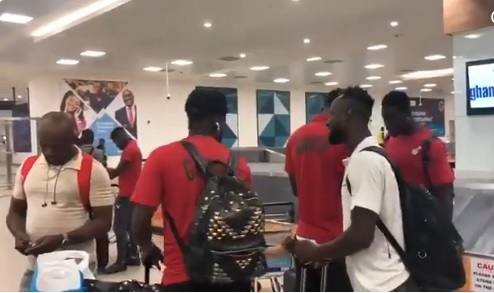 The Black Stars arrived home Thursday dawn from Egypt after suffering early elimination from the 2019 Africa Cup of Nations.

The contingent touched down at around 02:00am local time.

As expected, there were no fans at the Kotoka International Airport to welcome them back home after that calamitous campaign.

The four-time champions got knocked out 5-4 on penalties by Tunisia on Monday night after drawing 1-1 after extra-time.

The shock exit extended Ghana trophy since 1982 to 2021 when the tournament is hosted in Cameroon.

The Black Stars have arrived in Accra after exiting from the 2019 AFCON #TOTALAFCON2019 #BLACKSTARS pic.twitter.com/9Rojz9m39D