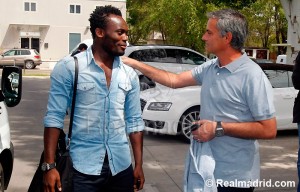 Michael Essien was on the verge of joining another club until Jose Mourinho intervened to sign him for Real Madrid, the Portuguese coach has revealed.

The Ghana midfielder joined the Spanish giants on the transfer deadline day in August on loan from Chelsea.

It has now been revealed that Essien was then negotiating a move to another club before the Real Madrid coach interfered with his offer.

Mourinho, who brought Essien to Chelsea when he was coach of the side, used his contacts with billionaire owner Roman Abramovich to convince the Blues for Essien to move to Spain.

Mourinho says his good relationship with the Russian, who fired him, played a key role in recently allowing Blues midfielder Essien to make a loan move to Madrid.

"We are in touch a lot, and the last example is Michael Essien was going to another club and when I did (gestures to telephone call) 'please leave it to your friend' he left to his friend," said the Real coach.

Essien was linked with loan moves to Arsenal, Juventus and AC Milan before he sealed his Real Madrid loan deal.

Watch interview with Jose Mourinho about his life, Essien and Abramhamovic