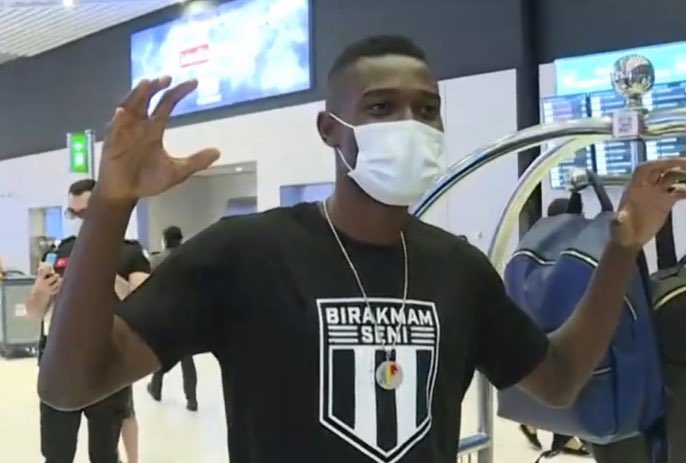 The 25-year-old arrived in the Turkish capital with his wife and two kids indicating that his move to Besiktas has already been agreed with his club Kayserispor.

He arrived in Istanbul in the company of his two kids who were also wearing the jersey of T-shirt of Besiktas indicating that the deal with the club has been sealed.

As revealed by Ghana's leading soccer earlier on Sunday, Mensah was expected to touch down from Kayseri at 10pm Turkey time and he was met by officials of Bsiktas at the new airport in Istanbul.

It was noteworthy that Mensah, who came to Istanbul Airport from Kayseri, was wearing a T-shirt symbolizing the "I won't let you go" campaign launched by Beşiktaş Club.

The Kayserispor player travelled to Istanbul after his club agreed to transfer him to Besiktas on loan deal pending a full transfer on a bumper contract.

He will undergo a medical test on Monday morning before sealing the transfer deal.

The Ghana international will sign a 500,000 Euros loan deal with Besiktas on Monday if he passes the medical.

Before travelling to Istanbul he signed a one year extension to his contract with Kayserispor who now have him under contract until 2022.

Beşiktaş will have the first option to buy Mensah for 4.5 million Euros at the end of the season.

Mensah was on a buyout clause of 2.8million Euros at Kayserispor at the beginning of last season before his latest contract extension scored 5 goals and 8 assists in 26 matches.

Watch video of Bernard Mensah and family arriving in Istanbul below: