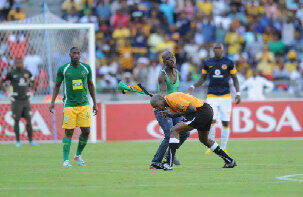 The fan attacking the referee with the vuvuzela
Share

A referee is recovering from shock as he emerged unscathed after a fan hit him with a vuvuzela during a South African top-flight league game.

The fan evaded security and ran at least 100m from the side of the pitch beforeÂ hitting referee Lwandile Mfiki with the plastic trumpet during Saturday's game between Golden Arrows and Kaizer Chiefs.

The fan used his plastic trumpet as a weapon, whacking it at the refereeâ€™s head in one of the maddest assaults weâ€™ve seen for some time.

After executing his initial attack, the fan amazingly had time to gather himself as he went to launch a second hit on the official, however the fan was eventually stopped in his tracks when a couple of security men finally appeared on the scene to manhandle the thug to the floor.

The incident came after Mfiki had sent off Chiefs midfielder Reneilwe Letsholonyane for a dangerous tackle in the first half, sparking protests from the players and a heated exchange of words between the two benches.

Watch video of the incident below: