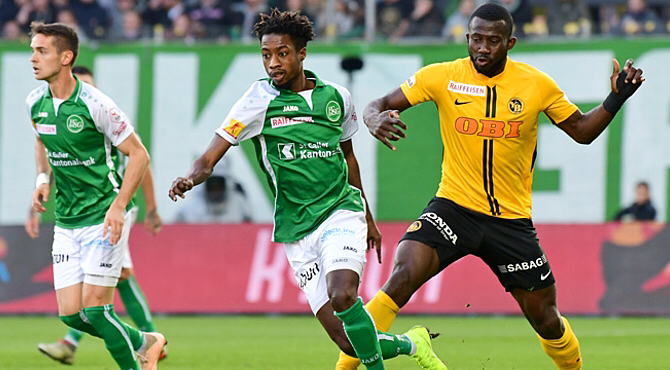 Ghana youth midfielder Majeed Ashimeru recovered from injury to score for St Gallen in their 3-2 loss against Young Boys in the Swiss Super League on Sunday.

Ashimeru had to pass a late fitness test ahead of the game after picking an injury in the side’s 3-1 friendly defeat against German Bundesliga II outfit Heidenheim last weekend.

The return of the Ghanaian boosted the morale of his teammates as they deservedly went ahead in the 32nd minute through Axel Bakayoko.

French forward Guillaume Hoarau pulled parity for the hosts in the 43rd minute.

Young Boys took charge of the game from there on as Hoarau again pulled them level from the spot in the 81st minute before sealing a remarkable comeback with a super strike on the 90th minute.

Ashimeru showed tiredness as the game wore on and was replaced with compatriot Musah Nuhu on the 77th minute.

The former WAFA midfield sensation has established himself in the side since joining on loan in the summer from Austrian giants Red Bull Salzburg.

He has provided 6 assists and scored 3 goals in 24 league games for the side in the ongoing season.

Sad about the result but we go again💪💪

Feels good to be back on the pitch again and on the scoresheet😎#Maker pic.twitter.com/DoYc25ZC41