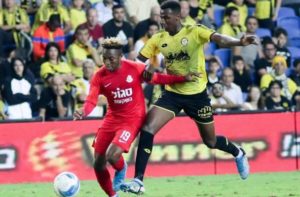 Ghanaian youngster Samuel Alabi scored a super-strike for FC Ashdod in their 3-3 draw with Maccabi Haifa in the Israeli Premier League on Wednesday.

Ashdod travelled to the xx Stadium with the aim of ending their disappointing four-match winless streak.

The xx were given a 40th minute lead through David Dean.

But Maccabi Haifa got into the groove in the second half and scored two quick goals via Yanic Wildschut and Yuval Ashkenazi.

With Ashdod loosing the game, coach XX made tactical change by introducing Samuel Alabi in place of Benzion Moshel in the 59th minute.

The substitution worked perfectly for the visitors as Shlomi Azulai brought them level via a penalty in the 76th minute.

Ashdod dominance paid dividends after Samuel Alabi handed them a lead for the first time in the match. The former Dreams FC star picked the ball on the edge of the area and played a superb one-two pass with Abu Akel before slotting a low shot past goalkeeper Josh Cohen with five minutes left in the clock.

The 19-year-old capped the goal with the renowned Cristiano Ronaldo’s trademark jump in the air and swivel celebration.

However, Maccabi Haifa struck back in the 92nd minute courtesy Maxim Plakushchenko to earn his a 3-3 stalemate.