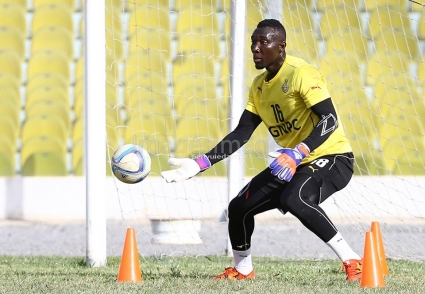 The Wa All Stars goalkeeper, who was part of Ghana's squad for last week's World Cup qualifier against Egypt, traveled directly to South Africa immediately after the match in Alexandria.

The 23-year-old started his two-week training with the Premier Soccer League (PSL) on Thursday and has already impressed the coaches of the club.

Ofori, touted as the best goalkeeper in the Ghana top-flight last season, is likely to be handed a deal by next week as Cape Town City have already spotted his excellence.

Agents close to the goalkeeper have revealed that the PSL club to initiate talks with his Ghanaian club Wa All Stars over a one-season loan deal.

They are seeking to seal an agreement ahead of the opening of the January transfer window to help him seal the switch in good time for the Africa Cup of Nations in Gabon.

The goalkeeper spent two weeks on holidays in South Africa last month with his close friend Edwin Gyimah of Orlando Pirates and it was during this visit that he grew the love for the PSL.

He was considering moves from other countries until his visit to South Africa last month which convinced him to consider the trial offer.

The Wa All Stars first-choice will be seeking to takeover as City's first choice shot-stopper even though they have some tough goalkeepers Shu-Aib Walters, Samoro Motloung and Gershin Kock.

He will become the second Wa All Stars player to join Cape Town City if he is successful after defender Joseph Adjei signed for the PSL club in August.

Ofori has been the key figure in the recent successes of the Ghana league champions Wa All Stars in the last two seasons.

He was adjudged the best goalkeeper at the end of the 2014/15 season and he is expected to clinch the the award again for the just-ended season.

Ofori beat Medeama’s Muntari Tagoe as well as Felix Annan of WAFA to win the award and his impressive performances was rewarded with a call-up to the Black Stars.

His call-up to the Black Stars ahead of Fatau Dauda who played in the South African top-flight shows his immense talent in the face of the vast experience of the former Orlando Piates keeper.

Ofori is a hotcake in the local market but foreign clubs have been showing interest as well.

He has been linked to several top sides in the local topflight including Asante Kotoko and Accra Hearts of Oak.

A member of Ghana's side that participated at the 2013 Fifa Under-20 World Cup in Turkey, Ofori also played for the Under-23 side at the 2015 All Africa Games.