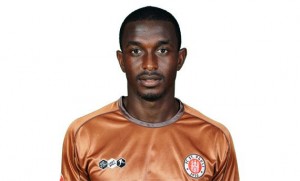 Ghana striker Charles Takyi continued with his good form in Denmark as he scored in Horsens' 2-1 defeat at the hands of FC Copenhagen.

The Horsens attacker fired his second goal in three matches over the weekend but could not save his side from defeat.

Takyi, who played for the Black Stars at the 2013 Africa Cup of Nations, moved to Denmark last month.

Since then Takyi has shown his prowess by impressing in all the three matches he has played since moving from Germany.

Â Watch video of the goal below