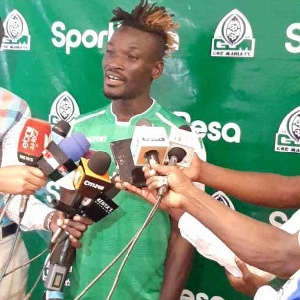 Ghanaian striker Francis Afriyie has revealed why his proposed move to Spanish Segunda Division side Real Zaragoza fell through.

During the January transfer window, Afriyie was heavily reported to be joining La Romareda Stadium outfit as a replacement for compatriot Raphael Dwamena who suffered a pulmonary problem just before the commencement of the season.

However, the transfer hit a snag and the 25-year-old instead joined Botswana giants Township Rollers.

The lanky forward has disclosed that the move failed to materialise due to a bureaucratic problem.

“Real Zaragoza has been following me and two years have passed since they began to follow me. The embassy denied my visa and did not know why, as they insisted that the team should bring some details back."

"So, by the time he got the papers, it was too late. I got my visa late and by then Zaragoza had started its season and I couldn't join them at the time. It is true that they were following me, but the problem was the visa."

Watch Afriyie's goals during his stint with Mexican side Murciélagos FC below;