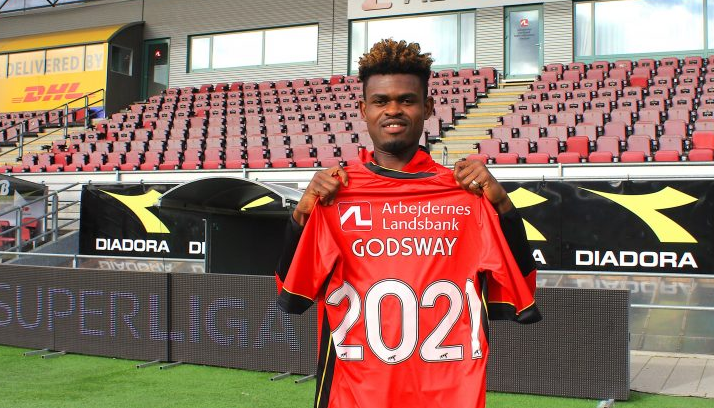 Ghanaian midfielder Godsway Donyoh has expressed his gratitude to FC Nordsjælland after signing a new two-year contract extension with the side on Tuesday.

Donyoh has been an instrumental figure at the Right to Dream Park since joining in 2016 from English giants Manchester City.

Despite suffering persistent injuries, he has netted 23 goals in 57 games for the Wild Tigers.

In an interview with the club's official mouthpiece, the 24-year-old thanked the side and stated his desire to continue serving them after showing faith in him.

"I have had an excellent time in the club and I am grateful for what FC Nordsjælland has done for me. It’s like a big family. They have helped me a lot and I have had the best moments of my career in this club. I’ve had offers from other clubs, but when I look back and think about what FCN and Right to Dream have done to me, I think they deserve the best,’’ Godsway Donyoh told the club’s website.

"The renewal of the contract is not just for me to thank FC Nordsjælland for the things they have done for me, but also to be an example of some of the young boys coming up from the academy. They are very busy, but they must know that they do not have to be busy. It’s about getting the best education before flying out, and I can say for sure, because I’ve tried it on my own."

Donyoh added, “I’ll finish it, as I’ve started here in the club. When I have to move on to something new, it should only be when I have achieved things with the team and the club. It’s my time now to get ahead of the line and help with anything but score goals. I’m part of the managerial group, and it also means that my responsibility is greater in the squad and in the club. That trust deserves, and it’s also a confidence I’ll give back before I do anything else.’’