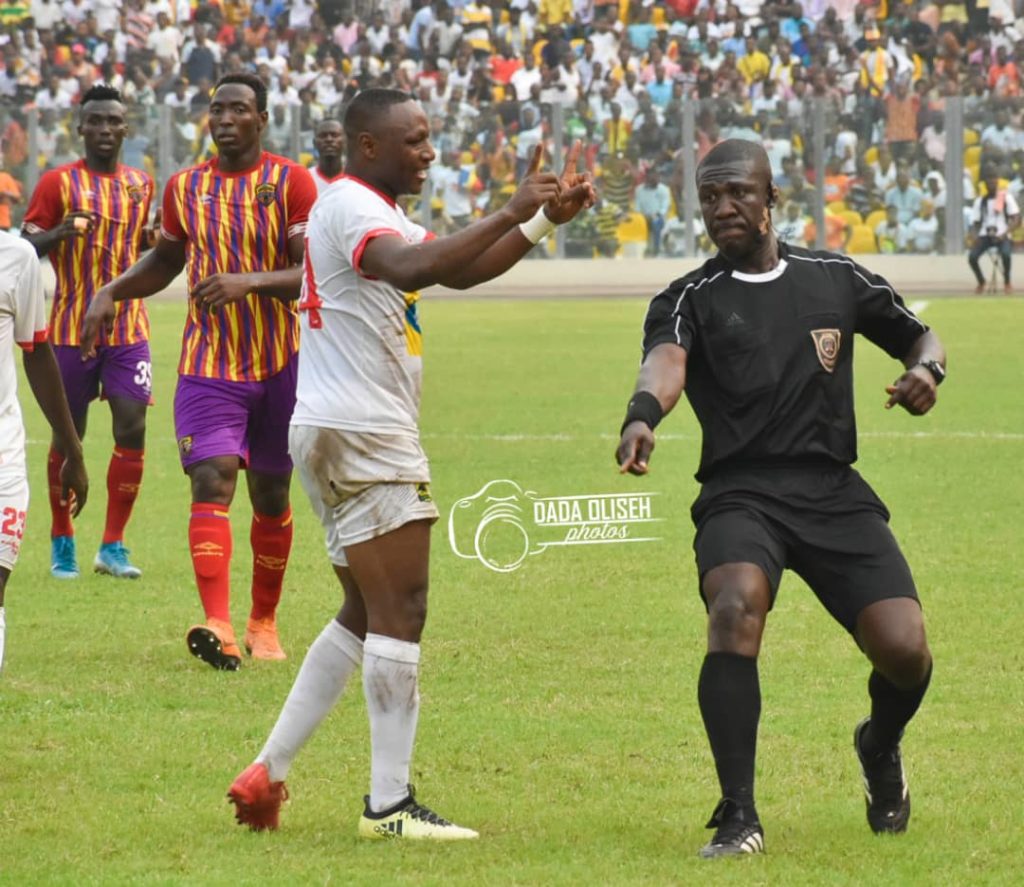 Fans of the Accra-based giants, citing latest FIFA rules on refereeing, say referee Eshun's decision which decided the game was wrong claiming it handed the visitors the victory.

A late Naby Keita penalty proved decisive as it handed the Porcupine Warriors a 2-1 away win over bitterest rivals Hearts of Oak in the Week 6 of the ongoing Ghana Premier League.

After Joseph Esso drew the hosts level following Justice Blay's opener for the Porcupine Warriors, the Guinean striker's effort emerged as the separating factor in Accra.

As the game looked to be heading for a draw, Kotoko were awarded a controversial penalty in the 89th minute when referee Emmanuel Eshun adjudged Hearts of Oak centre-back Mohammed Alhassan to have handled in the box.

Guinean forward Keita stepped up and expertly sent goalkeeper Atta the wrong way to make it 2-1 to the visitors.

In the aftermath of the match, several Hearts of Oak supporters complained bitterly about the referee's decision.

And rightly so, it was a contentious decision as stipulated by the FIFA handball rule.

The video replays showed that while the ball hit Alhassan's hand in the box, the ball touched his right foot before hitting his trailing arm.

There have been a slew of rule changes set to be introduced in the 2019-20 season , after the IFAB (International Football Association Board) - the body that sets rules in football - approved a handful of clarifications to the current Laws of the Game which seems to have played out in Sunday's big game in Ghana.

One of the most notable amendments was in regard to handballs.

The IFAB have confirmed that a goal scored or created with the use of an accidental handball will not count.

Formerly, rules around handball were based on the offence being deliberate. This is still the case, though now there are more specific examples of what should and should not be penalised.

The IFAB have now confirmed that a handball will be awarded if a player makes his body an "unnatural silhouette", i.e. making his body bigger with his arm. It is also automatically an offence if the arm is above shoulder height.

There is now no handball if the ball is deflected onto the arm, or if the ball hits a player using his arm for support.

How does the new handball rule work?

*A free kick or penalty will be awarded if:

*The ball goes into the goal after touching an attacker's hand or arm.

*A player wins ball possession after it comes off their hand or arm and then scores, or creates a goalscoring chance.

*The ball touches a player's hand/arm which has made their silhouette unnaturally bigger.

*The ball touches a player's hand/arm when it's raised above their shoulder.

There will be no penalty if:

*The ball touches a player's hand/arm close to their body and has not made their silhouette unnaturally bigger.

*A player is falling and the ball touches their hand/arm when it is between their body and the ground (but not extended to make the body bigger).

Watch the penalty decision below;