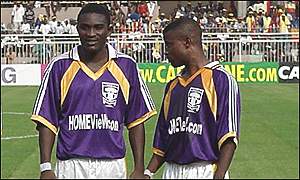 Addo admitted it will be tough when he was asked to name a five-a-side team made up of players from the Hearts of Oak sides he played with.

Stunningly, his top five-a-side team features neither him nor his ex-deadly partner Osei Kuffour 'General'.

But he picked his former team-mate Eben Armah 'Dida' and silky guardsman Stephen Tetteh, while Don Bortey and Charles Taylor also made the cut.

Fair to say it was hard work for the Hearts legend. pic.twitter.com/GoHjFxSadY

Addo and Kuffour formed a deadly duo at Hearts of Oak as they dominated the local league and also won the CAF Champions League and the CAF Confederation Cup in 2000 and 2001 respectively.