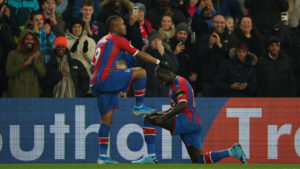 Ghana forward Jordan Ayew has been shortlisted for the English Premier League Goal of the Season for his superb solo strike for Crystal Palace against West Ham United on Boxing Day.

Collecting the ball in front of a crowd of bodies, Ayew mesmerised the visiting defence, danced his way majestically towards Roberto and dinked the oncoming ‘keeper with adept confidence.

Up until that point, both teams were pegged at 1-1 before the Ghana international conjured a bit of magic in the 90th minute to snatch the three points for the Eagles.

The full Goal of the Season contenders are as follows:

Watch the goal below;

The winner will be announced during a ceremony on March 5th at the Roundhouse in Camden.