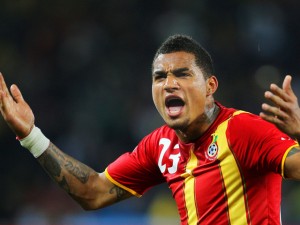 The AC Milan superstar took the football world by surprise at the end of last season when he took to the stage to perform the legendary Michael Jackson dance.

The German-born player completed the dance full with Jacksonâ€™s regalia which delighted the world and showed exposed his other talent.

But wait for this â€“ Boateng has now shown that he can challenge Usher, Chris Brown or R. Kelly and become a R&B superstar if he hones that career too.

This was shown to the world as he record as he recorded an acapella for Al Jazeera Sports Channel to celebrate their 8th birthday.

He singing was brilliant as he was backed by some of his AC Milan team-mates including Brazilian superstars Robinho and Pato.

This revelation will certainly also further swell his female fans acrossGhanaandAfricaas his Michael Jackson dance won him many hearts.

Despite his off-the-field excellence, he is performing on the pitch as he scored a hat-trick last week

Hate him or love him BOATENG is on top!

Watch the video of his singing below: [media id=319]