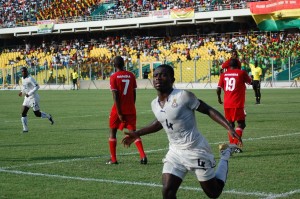 Sheikh Mansour, who owns the English side, personally invited the youngster to his base in Dubai to be observed by Al-Jazeera, the other club he owns.

Acheampong, who plays for Ghanaian side Berekum Chelsea, was handed the instant invite by Sheikh Mansour after watching videos of Messi in action for the Ghana youth side.

The hugely-talented Acheampong will spend two weeks at Al Jazeera before they decide whether to send him directly to Manchester City.

"The owner of Manchester City watched his videos and want to be sure if he's the one gifted with the footballing skills and technique," Berekum Chelsea president Emmanuel Kyeremeh told Ghanasoccernet.com

â€œFor now we can't say what will happen and which club he will be signed to play.â€

The youngster has wowed fans with his skills as well as scoring which drew comparison with the Argentine star Messi, who plays for Barcelona.

Getting an English work permit could be difficult for the Ghanaian Messi which means he could be signed and loaned out to a Belgian club.

He could also be signed by Al Jazeera and allowed to stay there until he is eligible for a work permit to play in England.

Italian side Udinese have already offered Messi the opportunity to play for them but Berekum Chelsea are said to be unhappy over the terms of the contract.

Acheampong is a member of Ghana's Under-20 team which has qualified for next year's African Youth Championship in Libya.