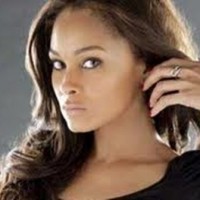 Now this is a whole lot of woman that does not need a lot of presentation but with hubby playing in the upcoming match between Milan and Genova it is impossible not to talk about Muntariâ€™s wife stunning Menaye Donkor.

Talking about lucky men! Iâ€™d say Ghanaian footballer makes top of the list! You might donâ€™t get the vibe from the picture but he truly is!

I mean he has a successful career and is married to gorgeous ex 2004 Miss Universe Ghana Menaye Donkor since December 2010.

Just so we can have an idea of this superwoman here some of the many jobs and responsibilities she has: Miss Universe Ghana â€™04/ CEO of Menaye Group/ Model&Aspiring Actress/ Founder of Menaye Charity Organization and Menaye School of Hope/ â€˜Nkosuohemaaâ€™ or â€˜Development Queenâ€™ of Agona Asafo/ New Face Of Printex! On top of all that she has some very grounded principles and she claims family comes first!

Menaye Donkor was born in 1981. She was brought up by her parents in Accra, Ghana, and is the youngest of seven siblings! with four brothers and two sisters I guess she and her sisters were well protected. Her alma mater York University where she graduated with honors in marketing.

In her early twenties she started modeling after winning the â€œMiss Universe Ghana 2004â€ pageant and graced the covers of many magazines in Ghana. She also did editorial work for magazines in South Africa, Milan and Canada.

In 2004 taking advantage of her recent fame she established the Menaye Charity Foundation, and took over the running of the Menaye School of Hope which her parents set up in 2001.

Menaye is now solely responsible for raising funds to support the school, which provides quality education to rural under privileged children, wow!

Menaye is also an active provider of medical care for over 600 orphans infected with HIV or AIDS, to melt your heart huh!

They became a couple the following year and she began managing his brand under her management company MENMUN . They got hitched in Accra on Christmas Day.

In September 2012, Menaye was chosen by the Chief and elders of Agona Asafo in the Central Region of Ghana as the â€˜Nkosuohemaaâ€™ or â€˜Development Queenâ€™ of the town, and whatever that means she has her name on a stool.

Menaye intends to branch out into the food and entertainment industry, business savvy and a beautiful woman now you see why I said Milanâ€™s midfielder is a lucky fellow?! What do you think mismatch or match made in heaven??