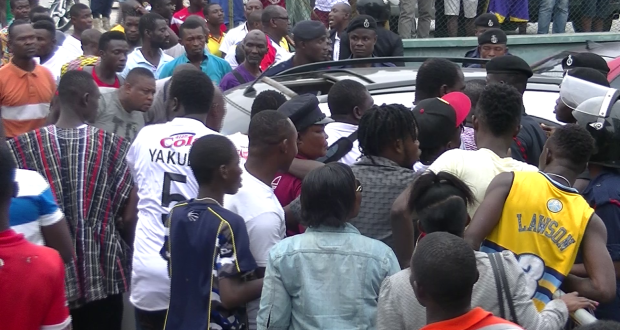 Hearts of Oak fans registered their displeasure with their team following their 1-1 draw with Elmina Sharks in Week 12 of the Ghana Premier League on Sunday.

The irate fans threw objects and booed at the team as they made their way out of the dressing room at the Accra Sports Stadium after the game.

It was the Phobians second draw at the stadium in recent weeks, which has dented their chance of closing the gap on the standings.

The result looks unpleasant for their vociferous supporters as arch-rivals Asante Kotoko who have adopted the venue are looking comfortable after inflicting a 3-1 defeat on Bechem United on Friday.

Hearts slip on the league table after the draw to Elmina Sharks as they occupy the 8th position with 17 points from 12 matches.

Unhappy Hearts Supporters after their draw with Sharks. Last week it was Kotoko fans booing their players, it’s Hearts this week. How do we manage supporters expectations of their team? #HappySports pic.twitter.com/q9x8tnMEXr