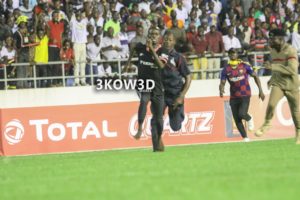 An enchanted fan of the Black Stars stole the show during the team’s 2-0 victory against South Africa in the opening fixture of the 2021 Africa Cup of Nations at the Cape Coast Sports Stadium on Thursday night.

Ghana got off to a flying start in the 2021 qualifying campaign courtesy a goal from either half by Thomas Partey and Kudus Mohammed.

Coach Kwesi Appiah could finally shrug off those who doubted he could deliver.

While Ghana will savour the moment, for many fans the enraptured fan who disrupted play at the dying embers of the game, was one of the high positives on the night.

The new GFA has launched a passion-igniting campaign for the Black Stars' African Cup qualifying campaign.

The drive, known as 'Bring Back the Love', is aimed at igniting passion and galvanizing support for the Black Stars as they seek to redeem themselves after their disappointing 2019 AFCON battle and upon the display of the team tonight means the passion is gradually resurfacing.

The team will aim to continue their superb start when they play as guests against São Tomé and Principe on Monday, November 18, 2019.