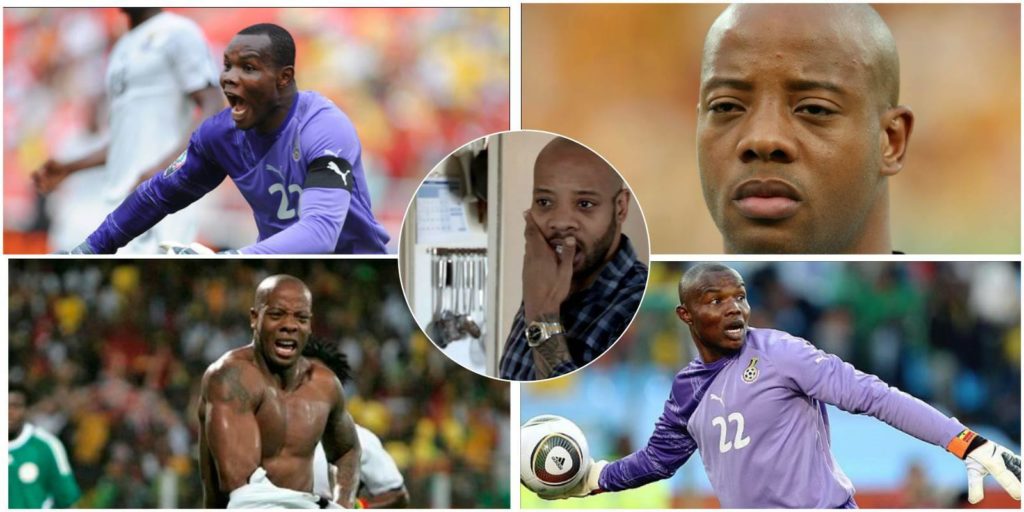 Richard Kingston apologised to Junior Agogo and his family
Share

Ex-Ghana goalkeeper Richard Kingston apologised to his colleague Junior Agogo and his family after news came out that the Black Stars neglected the striker when he suffered stroke last year.

Agogo died unexpectedly on Thursday morning after battling the illness in London which has led to outpouring of grief with the striker passing away at aged 40.

Agogo was one of Ghana's key players in his generation and when he fell ill it was thought some of his national team-mates should have reached out to him but he said no one contacted him.

Following the revelation by former Black Star's forward, Junior Agogo about being neglected after he got stroke, his colleague Richard Kingston has rendered an apology to him and his family

Agogo, 40-year-old, suffered the stroke in January 2015, after ending his football career and had Aphasia before passing away on Thursday.

Junior Agogo was being taken care of by his mother in London.

Aphasia is an impairment of language, affecting the production or comprehension of speech and the ability to read or write. Aphasia is due to injury to the brain, especially from a stroke.

In some cases, it makes communications with the patient impossible. It is associated with difficulty to retrieve names of objects and inability to put together sentences.

Speaking for the first time after the stroke, Agogo in a BBC documentary published on Sunday, said the stroke left him lacking confidence, and he feels socially isolated.

Agogo played for Bristol Rovers between 2003 to 2006, before moving to Nottingham Forest.

Junior Agogo (real name Manuel Agogo), is a Ghanaian striker who made 140 appearances for the Rovers.

He joined from then Conference side Barnet, for a fee of £110,000 with Giuliano Grazioli moving to Underhill as part of the deal.

Agogo played a key role as the Black Stars clinched bronze at the 2008 Africa Cup of Nations tournament.

He made a total of 27 appearances for the senior national team.