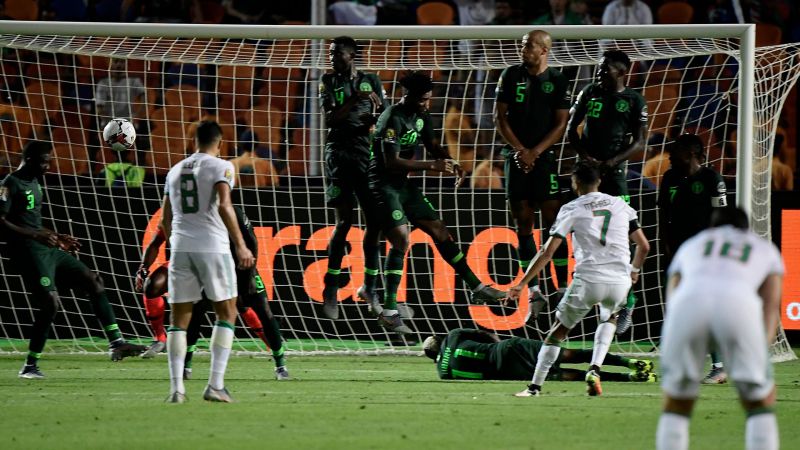 Algeria's forward Riyad Mahrez (R) scores from a free-kick during the 2019 Africa Cup of Nations (CAN) Semi-final football match between Algeria and Nigeria at the Cairo International stadium in Cairo on July 14, 2019Getty Images

Riyad Mahrez's stunning 95th-minute free-kick sent Algeria into their first Africa Cup of Nations final in 29 years as Nigeria were this time the victims of late drama.

After an own goal sent Senegal into the final at Tunisia’s expense, the same misfortune struck Nigeria in Sunday’s second semi-final when William Troost-Ekong inadvertently chested the ball into his own net.

However, it did not prove to be the decisive goal, as Odion Ighalo’s penalty – awarded after a lengthy VAR decision – levelled proceedings with 20 minutes to go.

Nigeria had reached the last four thanks to a last-minute winner, but this time their hearts were broken when Mahrez curled a free-kick into the top corner with virtually the last kick of the game.

Algeria's bid for a first AFCON title since 1990 will take place on Friday, as they face Senegal.