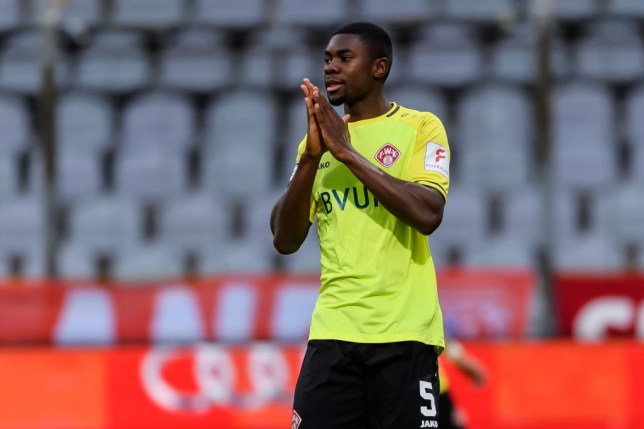 An entire stadium stood up to chant ‘Nazis out’ when fans reported a fellow supporter to security for racially abusing Germany-born Ghanaian Leroy Kwadwo.

The 23-year-old was the subject of abuse from a fan, which was heard by supporters, who quickly alerted security.

Kwadwo was in action for German third-tier side Wurzburger Kickers against Preußen Munster and was visibly shaken by the incident.

As the fan was escorted out of the stadium, supporters stood up and began chanting ‘Nazis out’ in an incredible show of support for Kwadwo.

He was then comforted by his team-mates and opponents as the ugly scenes were resolved.

Kwadwo released a statement after the game, praising the support he received and the reaction of the crowd.

When other fans saw it, they alerted security, who escorted the man out.

Then, as opposing players came to hug Kwadwo, the entire stadium stood up and chanted "Nazis Out!" pic.twitter.com/FHQP9Pe18J

He said: ‘Regrettably, there was an unfortunate incident during our away game at Preußen Munster.

‘I was racially insulted by a single viewer. This just makes me sad. ‘I have a different skin colour, but I was born here, in this wonderful country that gave so much and made things possible for me and my family. I am one of you.