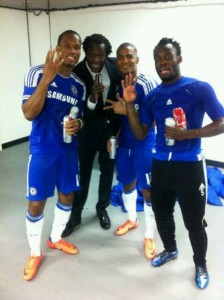 The impact of Ghanaian midfielder Michael Essien is still being discussed by fans of the English side Chelsea as he is excelling at Real Madrid where he is on a season-long loan.

The 29-year-old midfielder, who joined the Blues in 2005 from Lyon, moves to the Bernabeu to link up with former Chelsea manager Jose Mourinho, the man who brought him to Stamford Bridge.

This has led to some debates about the rights and wrongs of the decision to loan him out to Real Madrid.

Essien has been a pivotal member of the Blues midfield during his six seasons in west London, winning two Premier League titles, four FA Cups and one Champions League winners' medal.

Lets examine the video of some of the best goals he scored for Chelsea.

'After making his debut as a second-half substitute against Arsenal at the beginning of the 2005/06 season, he went on to play a key role in helping the Blues secure back-to-back titles.

The Ghanaian scored his first goal for the club during a 2-1 win against Tottenham and won the Goal of the Season for his long-range strike against Arsenal a year later.

He followed that up with the same award for his volley against Barcelona in the Champions League semi-final.

In total he has scored 25 goals for Chelsea in 247 appearances.

He is a popular figure among team-mates, management and supporters.