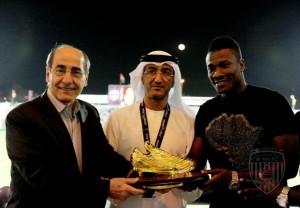 Watch video of Ghana captain Asamoah Gyan receiving the Arabian Golden Shoe award for emerging the top scorer of all Arabian Leagues in the 2011-2012 season.

Watch video of the short ceremony below

Gyan was presented with the award by the editor of the Al Hadath Al Riyadi magazine, Saeed Gabris as the 33rd winner of the prestigious price since it was initiated in the 1979-1980 season.

He becomes the first Ghanaian to receive the prestigious accolade.

Gyan, who was not in action, received the award initiated by the Al Hadath Al Riyadi magazine to honour top scorers in the Arab region.

His goal haul was far in excess of second-placed Ahmed Hayel who won the top scorer award in the Jordanian top flight with 18 goals in 22 games.