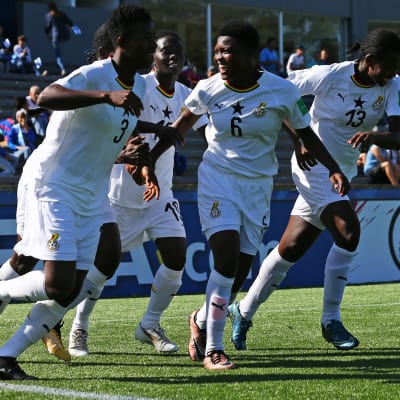 Ghana won their second game in a row at the FIFA U-17 Women's World Cup Uruguay 2018 with a closely-fought 3-1 victory over Finland in Montevideo on Friday.

Just like they did in their opening Group A match, Ghana found the game’s first goal. Mavis Owusu made a lung-bursting run down the right wing before cutting a diagonal pass back on the ground. Finland captain Tuuli Enkkila scuffed her clearance and the ball fell kindly to the feet of Millot Pokuaa, who calmly slotted in for her second goal of the tournament.

Pokuaa then turned provider for Ghana’s second goal, which came from their right flank once again. Pokuaa floated in a cross for Mukarama Abdulai to head in from close range for her tournament-leading fourth goal at Uruguay 2018.

The second half was better from Finland, who ended up scoring their first-ever goal at a U-17 Women's World Cup. Vilma Koivisto unleashed a fierce shot on goal that Ghana keeper Grace Buoadu spilled before substitute Jenni Kantanen put in the second chance from close range.

However, Ghana restored their two-goal cushion through Grace Animah's free-kick. Finland goalkeeper Anna Koivunen was unable to punch Animah's floated-in shot clear and gifted the Black Maidens their third goal of the day to make it two wins from two for the side from West Africa.