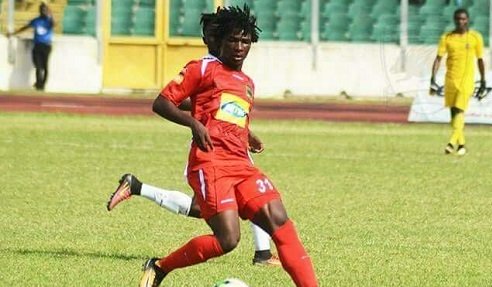 Asante Kotoko SC were held at home by Al Hilal Omdurman to a 1-1 stalemate at the Baba Yara Stadium on Sunday which put a dent on their chances of making it to the quarter-finals.

CK Akonnor made two changes to his starting lineup with Amos Frimpong making a return from suspension.

The visitors broke the deadlock in the 33rd minute when Waleed Bakhiet Hamid's header from an Abdellatif Boya cross beat Felix Annan.

The Porcupine Warriors came close to getting equalizer in the 37th minute but Songné Yacouba's attempt went wide.

Emmanuel Gyamfi had the opportunity to level for the hosts when a begging chance fell his way but failed to connect four minutes from halftime.

The Fabulous lads nearly got the equalizer in the 60th minute when Abdul Fatawu Safiu saw his free-kick struck the crossbar.

Asante Kotoko finally pulled parity with four minutes to the end of the game after Yacouba headed home a Stephen Nyarko cross.

The Porcupine Warriors travel to Zambia to take on ZESCO United next week in their last group game.

Watch the highlights below;

Kotoko's KO stage chances in the Confederations Cup takes a real hit. Highlights of how that happened in Kumasi pic.twitter.com/flcc633Jnf