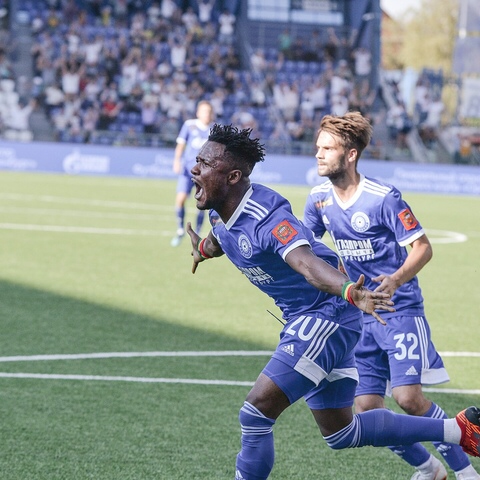 Striker Joel Fameyeh climbed off the bench to score two goals in four minutes for FC Orenburg who rallied to snatch a 2-2 draw with Tambov FK on Saturday in the Russian Premier League.

FC Orenburg have endured a difficult start to the Russian top-flight league following their failure to pick a point after four round of games.

The Blue and Whites were hoping to end that disappointing streak when they welcomed newly-promoted side FC Tambov to the Gazovik Stadium on Matchday 5 of the league.

But their hopes were dented after Ivorian defender Cedric Gogoua put the visitors ahead in the 26th minute.

FC Tambov looked to be cruising to victory following Khasan Mamtov gave them the cushioning    in the 68th minute.

FC Orenburg coach Vladimir Fedotov quickly tweaked his tactics and brought on Joel Fameyeh in place of midfielder Ricardo Alves on the 70th minute mark in a bid of salvaging at least a point in the match.

Fedotov‘s tactical switch worked wonders after Fameyeh reduced the deficit with a smart finish in the 74th minute before directing home from close range for the equalizer four minutes later.

Fameyeh joined the club on a three-year deal from Belarusian side Dinamo Brest this summer.