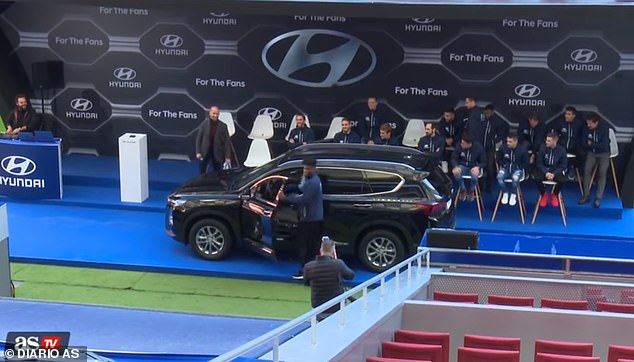 Atletico Madrid Thomas Partey caused himself some embarrassment when he struggled to start his brand new car donated by his club's sponsor as he nearly crashes into the fence at the Wanda Metropolitano during an unveiling event.

The Ghana international midfielder was among the Atletico Madrid stars who were presented with a Hyundai at their stadium and Partey hopped into his and tried to start it up.

The Ghanaian midfielder put himself in the driving seat of his Hyundai and his fellow team-mates quickly realised he was struggling to get it going.

Antoine Griezmann and Co burst into hysterics as they watched on before Partey managed to get it started.

Partey then took the car on a joy ride behind the giant Hyundai advertising board before making a beeline for the corner of the pitch.

Despite hitting the breaks, however, the car looked as if it was hurtling towards the advertising hoardings before Partey guided it safely away from harm – avoiding another gaffe in the process.

Diego Simeone will hope his midfielder shows a little more composure when Atletico take on Espanyol on Saturday.