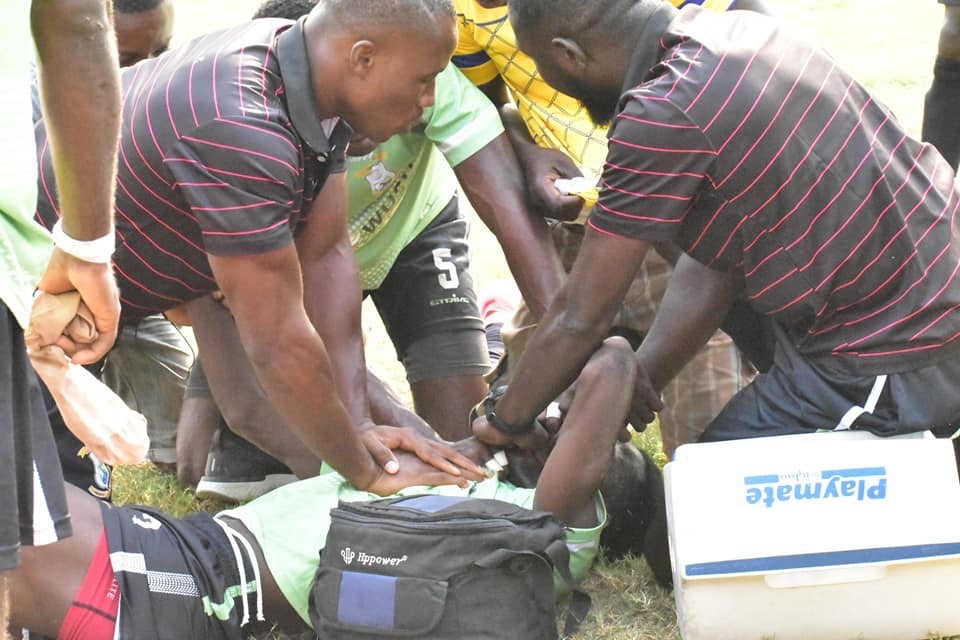 A footballer can die at work; right on the pitch, with thousands watching on while doing what he loves. Yes, it does not happen often, but it does happen. The beautiful game sometimes becomes a fatal game.

Cheers can transform into tears, just like that- sometimes from a seemingly harmless collision between players, or a sudden collapse, unprovoked.

It takes a special kind of instinct inspired vision for one to spot a potentially fatal situation that everyone might either miss or consider normal – a vision that could prove to be the difference between life and death.

In the past, there has been quite a number of dramatic incidents in which footballers- the main actors many fans travel the length and breadth of a geographical area to see play, rather lose their lives just like that.

Not to bring back bad memories but the likes of celebrated football icon, Marc-Vivienne Foe, Jeanine Christelle Djomnang, and Cheick Tioté – just to mention few, departed the world without saying final goodbyes to their family and loved ones. Cardiac arrest or heart attack being the main cause of their demise and due to the unhurried response from whoever they were with at that given moment.

In a Division One League week 6 fixture between hosts Vision FC and Agbozume Weavers last Saturday, Benjamin Aloma – a budding left-back, in the setup of the Amrahia-based side almost came close to having his name added to the long list of footballers who lost their lives in the line of duty.

But for the swift response of the medical team led by Roy Ricky Romeo, 18-year old who laid flat would’ve swallowed his tongue after a sickening collision with a player of Agbozume Weavers. Having been called upon by the center man for the game, Roy’s first magical instinct to know where to kick-start his administering of first aid was just remarkable.

For a physical trainer who last month, was appointed at the national under-20 team (the Black Satellites) in the same capacity, this was the best moment to prove to the masses that he truly merits it.

“I saw him fall, from the way he landed I knew he was going to go off.” He said. “These situations are rare but when they happen, you dare not take that for granted”.

With the game brought to a temporary hold up for the medical attention which took close to ten minutes to resuscitate the player’s condition, everyone at the match venue hoped and prayed Aloma will make it.

Some teammates gave a helping hand to the medical team, center- back Samuel Amoako instructed to try to force his fingers into the left-backs’ mouth so some oxygen can go through while Roy and his mate Samuel Nii Quartey performed the Cardio-Pulmonary Resuscitation.

“I asked Amoako to force his fingers into his mouth because while Sammy and I were performing the CPR, there had to be some oxygen to aid in the process. He wasn’t breathing but that’s the best practice. We had to make sure the airway was clear by any means possible.''

After a lengthy back and forth, keeping the pressure, the footballer tried to utter a word. That is when those closest to the scene saw that he had regained consciousness.

''It was all over in five minutes, and when he actually tried to say something I knew he had woken. That’s when I instructed the Red Cross to stretcher him off for the game to continue.”

A hero on the field as proven by his exploits on Saturday, Roy deserves the recognition despite the team’s three-one home win against the visitors on the said day.