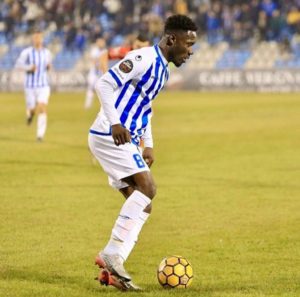 Former Hearts of Oak lynchpin Winful Cobbina registered a Ronaldinho-like assist to send KF Tirana to the top of the Albanian Premier League table following a 2-1 victory against Kukesi on Friday.

Cobbina demonstrated his importance to the Blue and White lads once again as he danced his way through the defense of Kukesi to set up a winning goal in the 86th minute.

Tirana needed to beat Kukesi to reclaim top spot in the Albanian Premier League as they went into the game sitting just a point above their fiercest rivals.

However, it was Kukesi who took the initiative in the 53rd minute through Kristi Vangjeli‘s own goal.

Tirana found their way back into the match course a strike by Idriz Batha in the 84th minute.

Cobbina picked the on the bye-line and beat two Kukesi players before releasing a low pass to the Argentine forward to tap into an empty net.

Cobbina enjoyed full throttle of action for the Tirana.

He has made 20 league appearances, contributing 4 goals and 3 assists.