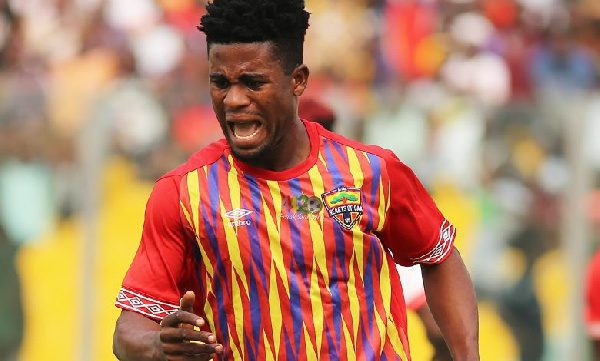 The mother of Hearts of Oak star Daniel Afriyie Barnieh has been left overjoyed after her son was named in Ghana's final 26-man squad for the 2022 World Cup in Qatar.

Miss Comfort Akosua Konadu has been left with tears of joy after learning of the latest feat from her beloved son.

Barnieh's inclusion was first reported by your trusted football website, Ghanasoccerent, last week, and was confirmed on Monday by coach Otto Addo who announced his 26-man squad in Accra at a press conference.

And his inclusion has sparked a wave of excitement across the country including his mum.

Daniel Afriyie Barnieh's mother couldn't hold back her joy after her son was named in #BlackStars' 26-man squad for Qatar 2022 World Cup.#Qatar2022onMG #3Sports

Barnieh has been named as one of the Black Stars' midfielders for the tournament, which begins on November 20.

He will leave Ghana with other Football Association officials on Monday evening for the training camp in Abu Dhabi.

Barnieh, a member of the Ghana U20 squad that won the Mauritania Africa Cup of Nations in 2021, has been one of the best players in the Ghana Premier League in recent years.

He was drafted into the Black Stars after the tournament in Mauritania and has worked hard to earn a spot for his first tournament with the senior national team. He was Black Galaxies' best player as they qualified for the 2023 African Nations Championship.

The 21-year-old has made two appearances for the Black Stars and would be hoping to add to it in Qatar.

Ghana will play Switzerland in their final pre-tournament friendly before the World Cup begins on November 24 against Portugal.

They will play South Korea four days later before concluding their group stage campaign on December 2 against Uruguay.