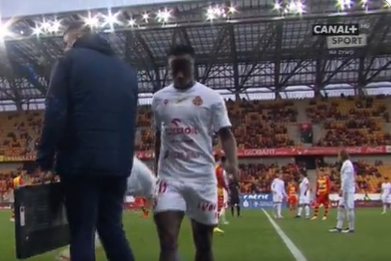 Ghana midfielder Yaw Yeboah was left fuming after he was subbed just 12 minutes into the game between Wisla Krakow and Jagiellona.

The Black Stars player had to be sacrificed after Wisla were down to ten men just eight minutes into the game following Michal Frydrych's red card.

Yeboah had to be replaced by defender Serafin Szota as Wisla played 75 minutes with ten men.

Blazej Augustyn gave the host the lead in the 41st minute but Wisla leveled through Szota.

But Jagiellona took advantage of their one man superiority to score two second half goals from Tomas Prikryl and Michal Zyro.