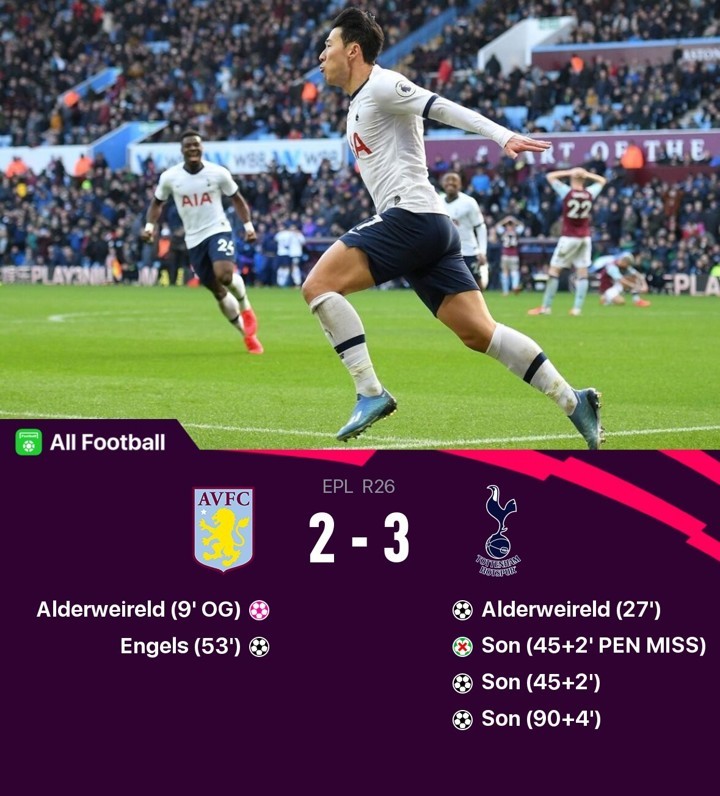 Aston Villa were made to rue a late error as Tottenham won a barnstorming Premier League clash at Villa Park.

Engels' equaliser appeared to have earned the relegation-threatened hosts a point at Villa Park, but his failure to control a long ball allowed Son to coolly steer past Pepe Reina.

Son had earlier put Spurs 2-1 in front from the rebound of a penalty awarded as a result of an Engels foul shortly before half-time, the forward's first in the game coming after team-mate Toby Alderweireld had scored at both ends.

Villa remain just a point above the bottom three, while Champions League-chasing Spurs are just one point adrift of fourth-place Chelsea.

El Ghazi beats Davies and swings a dipping cross right into the path of Alderweireld. With Samatta lurking behind him in the six-yard box, Alderweireld can only poke it into his own net.

Villa play a spot of keep-ball in their box as Tottenham half-heartedly press. Grealish skips clear down the left and cuts back to give Luiz an open net. Luiz has to score, but Davies somehow gets in the way and deflects it over the bar!

Spurs' corner doesn't beat the first man but Villa can't clear it. Alderweireld makes up for his own goal by smashing the bouncing ball into the net on the turn from a tight angle!

PENALTY FOR TOTTENHAM! Bergwijn beats the offside trap from Winks' over-the-top pass. Engels slides in but it turns out he only got Bergwijn.

Son is the one to take the penalty. Reina dives to his right to keep out the South Korean's shot but Son rushes in to scramble the rebound into the net. He becomes the first Asian player to score 50 Premier League goals!

What a game this is, and what a simple goal for Tottenham to concede! Grealish sweeps the corner in from the left and Engels rises high to nod it past Lloris.

Tottenham blow another opportunity to go 3-2 up! Lo Celso spots Aurier's run down the right and finds him. Reina blocks Aurier's cross at his near post and it lands to Bergwijn whose effort is blocked! It's a Spurs corner which Villa defend well.

Grealish finds himself a pocket of space outside Spurs' box and shoots only for Alderweireld to get in the way. Spurs counter straight away and Son is denied by a combination of Reina and Hause! Villa look so vulnerable on the break.

Lucas heads wide from Lo Celso's corner. Spurs get a second corner as Reina saves Son's shot from the left of the box! Lo Celso's ball comes in and Son is denied again.

Heartbreak for Villa! Engels can't trap a simple ball forward and accidentally sends Son clean through on goal! Son dashes into the box and calmly rolls the ball under Reina into the far bottom corner. That's his second of the game.