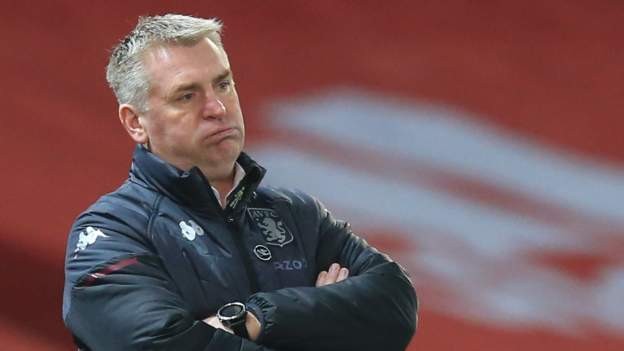 Dean Smith says the "uncontrollable" coronavirus outbreak which caused two of Aston Villa's league games to be postponed is a warning to other clubs.

Boss Smith takes his side to Manchester City on Wednesday, having only reopened their training ground on Sunday.

Villa have not played for 19 days after two Premier League games were postponed when several players and staff tested positive for Covid-19.

"It is a warning and it was certainly a warning to ourselves," Smith said.

"You're worried about anything you touch after that because you can see how rampant it is."

Smith would not name which players had caught the virus and who was still struggling, but said his team selection for the trip to Etihad Stadium would be "affected".

Villa's training ground at Bodymoor Heath was closed on 7 January and the players only returned on Sunday, giving them three days to prepare for second-placed City.

"The first day was almost like the kids' first day back in the playground and they were full of energy and enthusiasm," said Smith, whose side are 11th in the table.

"It was good to see them back on the grass again. They looked really bright, so I'm hopeful for a bright return.

"I'm not going to make any excuses for the issues."

The outbreak began shortly after Villa lost 2-1 at Manchester United on 1 January.

It meant Villa's home game against Tottenham, originally planned for 13 January, and last Sunday's visit of Everton were called off.

Those postponements came after Villa had no first-team players available for the FA Cup third-round tie against Premier League champions Liverpool.

The West Midlands club had to field a starting XI composed of seven under-23 players and four from the under-18s, losing 4-1 to a strong Reds side at Villa Park.

"The doctor called it an uncontrolled outbreak in our bubble," Smith said.

"We have no idea how it came into the camp. We followed all the protocols."

When they were tested again a few days later, there were nine positive results of which six were players.

Smith said a round of testing the following day produced another five positive tests, with "a couple more" after that.

"A lot were asymptomatic," he added.

"One of the players who tested positive said he felt good and two days later he was laid up in bed with symptoms.

"We're thankful that our doctor was very quick to deal with it."