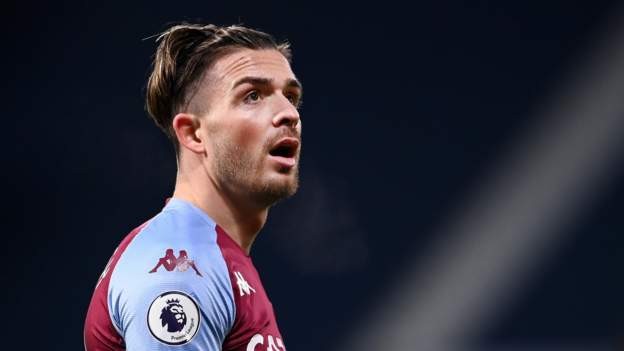 The 24-year-old signed a six-year deal with Manchester City on Thursday but Purslow insisted Villa had had a "strong desire"external-link to keep the £100m England midfielder.

Purslow said Grealish "instructed us to exercise his release clause", which saw him join City for a British record fee.

"It was a highly emotional moment when he told me his decision," Purslow said.

Other clubs' interest in Grealish in the summer of 2020, which included links with Manchester City and Manchester United, prompted Villa to offer Grealish a new deal.

Grealish duly signed the five-year contract in September 2020 - but insisted it had a release clause written into it, with the Villa captain asking the club not to block any future move if a side playing in the Champions League made an approach.

"Jack wanted to be certain that if at any point a Champions League club came in for him and Aston Villa were not in the competition we would not stand in his way - for that reason we agreed to incorporate a so-called release clause into his contract," Purslow said.

"Our board set this clause at a value of £100m knowing that would be, by some way, a record price for a British footballer and also a record fee for any player bought by a Premier League club.

"We set the value at a level we hoped would not be met, but which would reflect his truly unique value to Aston Villa."

Where does Grealish fit in at Man City?Quiz: Name the past 13 players to go for a British transfer recordHow would you get Grealish in the team? Pick your Man City XI

Purslow said Villa "simply refused to entertain" bids below the £100m clause earlier in the summer after Grealish helped England to the European Championship final.

After City said they would "trigger" it, however, Purslow said "many hours" of discussions took place with Grealish, his agent and family.

Purslow added that he was left in "no doubt how hard it had been" for Grealish to decide to leave a club he first joined at the age of six.

"Ultimately, he said it boiled down to wanting to play Champions League football now," Purslow said.

Villa have spent the summer planning for Grealish's departure, with Danny Ings' arrival from Southampton on Wednesday the final piece of the replacement puzzle after Leon Bailey joined from Bayer Leverkusen and Emiliano Buendia made the move from Norwich City.

"It was never our intention to replace Jack with one footballer; our strategy was to analyse and break down Jack's key attributes - his creativity, his assists and goals - and find those qualities and others in three forward players.

"We believe we have achieved this key objective. And in doing so have also reduced an overdependence on one brilliant footballer."