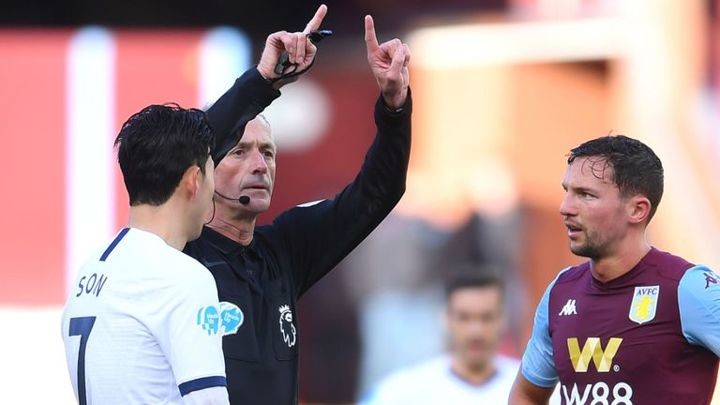 Aston Villa manager Dean Smith has criticised the use of VAR after an overturned penalty decision contributed to his side's dramatic 3-2 defeat to Tottenham on Super Sunday.

Toby Alderweireld had earlier atoned for his own goal to restore parity before Son was handed the chance to put Spurs ahead after Bjorn Engels was deemed to have brought down Steven Bergwijn inside the box by VAR Jonathan Moss.

Smith told Sky Sports: "Unfortunately, we'll end up talking about VAR again which is unfortunate because I thought it was a good spectacle with two teams going toe-to-toe trying to win the game.

"So we're again sat in a sterile environment looking at something that everybody in a stadium of 42,000 people, our staff, their staff, don't think it's a penalty.

"I don't know why Martin Atkinson doesn't go over to the monitor to have a look and then play on. If you're looking at it seven or eight times, then it's not clear and obvious. They've overturned what was a good decision by the referee."

Son cashed in on Engels' stoppage-time error to snatch the three points for Jose Mourinho's side after Engels' 53rd-minute header had looked like earning Villa a priceless point in their fight against relegation.

"We have to try to take the positives," Smith added. "The last two home games here, we've scored last-minute winners, so we know what it feels like on the other foot. It was a good performance today and could've put the game to bed earlier on as we've missed some big chances after taking the lead.

"To go in 2-1 down was the hard part, but I told them to go out and to win the second half. Bjorn scored a good header but then unfortunately makes a big mistake right at the death. He's tried to bring it down rather than put it back over their centre-half's head. It happens all over the pitch so there's no blame apportioned."

Fifth place in the Premier League is now likely to offer a Champions League spot following Manchester City's two-year European ban, although it is yet to officially be confirmed and City are appealing.

The result moved Spurs - who face fellow European hopefuls Chelsea and Wolves in their next two top-flight games - above surprise package Sheffield United into fifth, while Villa remained a point above the drop zone in 17th.

Mourinho admitted that he had not watched back the incident involving Bergwijn and Engels, but told Sky Sports: "We had this little bit of luck in the last minute, but we scored a fantastic goal in a fantastic match against a great opponent.

"I have to praise the referee too with a lot of experience, trying always to avoid the yellow card and Martin showed why he is very experienced and why he is a top-class referee.

"It was a performance with mistakes. The guy that loves football, loved the game. The Tottenham head coach would prefer a different game, more solid defensively.

"We gave away poor goals and another couple of chances. We created so much and had to kill this game earlier. We made a bad start, a bad collective start. But it was a performance with a fantastic mentality, personality and desire to win. Fantastic football.

"I think it's the match since I arrived when we created the most chances. We had so many chances to score and not just the chance that arrives occasionally but the chance that we build and that we really work for and beautiful football."