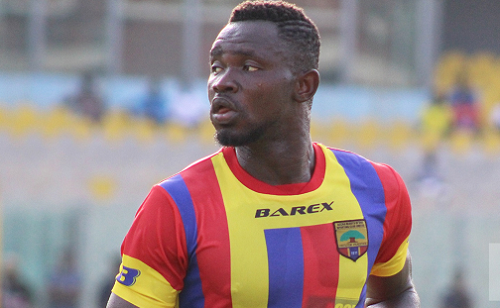 Former Hearts of Oak defender Vincent Atingah has sent goodwill message to the club ahead of the start of the 2019/20 Ghana Premier League season.

The defender, who currently plies his trade in Kuwaiti wished the club the best in the 2019/20 season, hoping they end their barren run of winning major trophies.

He posted," Merry Christmas to Accra Hearts of Oak and a happy new year. As they commence the I wish them good luck."

The Phobians begin their season with a home game against Berekum Chelsea at the Accra Sports Stadium on Sunday.

Atinga was a key member of the club during the 2017 season, where the club finished third and reach the FA Cup finals.

MERRY CHRISTMAS 🎁🎄 TO ACCRA HEARTS OF OAK AND HAPPY NEW YEAR 🎆 AS THEY COMMENCE THE GHPL I WISH THEM GOOD LUCK @HeartsOfOakGH #stillphobia pic.twitter.com/4Z4HntFZ5r