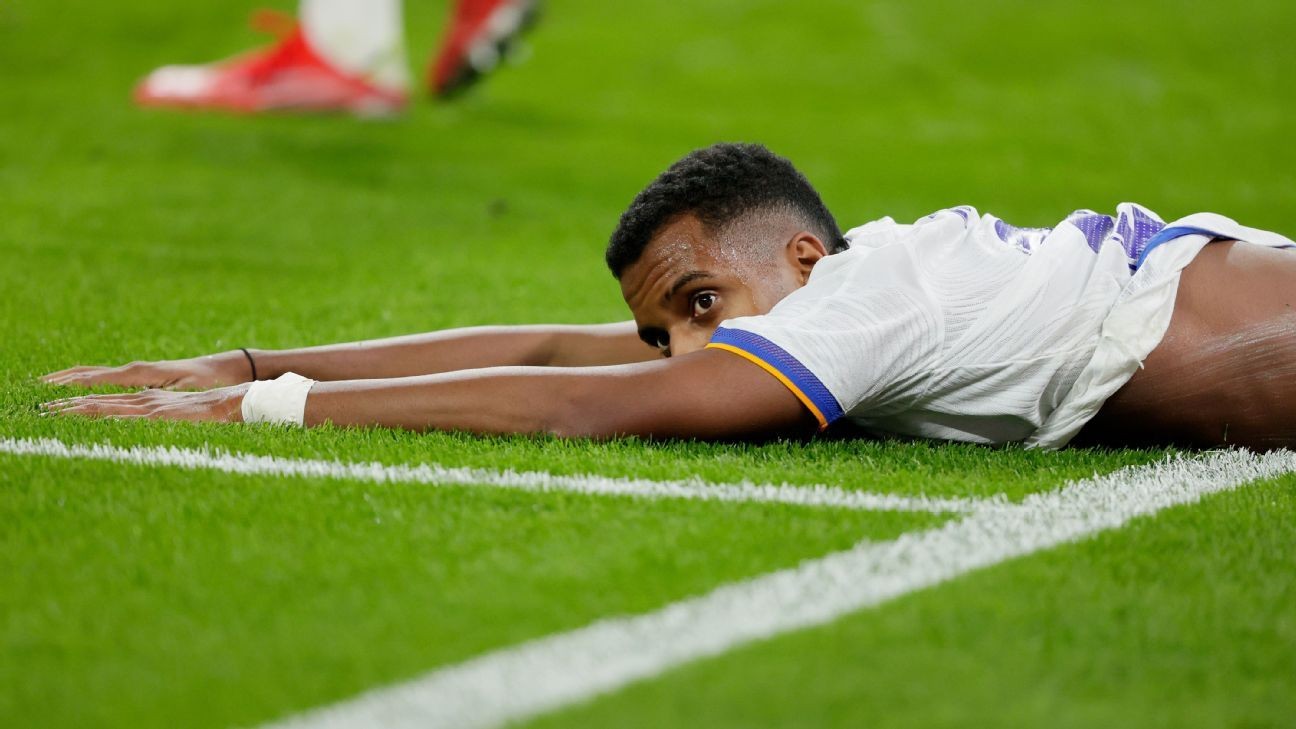 Real Madrid were held to a 0-0 home draw by Osasuna on Wednesday, missing the chance to go clear of their title rivals at the top of the LaLiga table.

The first half saw few chances for either team. Eduardo Camavinga fired into the side netting with 20 minutes played and Eder Militao and Toni Kroos both had shots saved as Madrid tried their luck from long range, before Vinicius Junior flashed a shot wide.

Osasuna's best chance came not long after halftime as Jon Moncayola hit the post from Chimy Avila's cross. Kroos went for goal again from distance, Rodrygo fired a cross-shot across the six-yard box and Karim Benzema hit the bar. Casemiro almost caught out Sergio Herrera with an ambitious lob and Marcelo beat the goalkeeper only to see the ball float harmlessly wide, as the game ended scoreless.

Vinicius Junior got plenty of headlines after the Clasico win over Barcelona, and he was impressive again here. He never stopped asking for the ball -- he's more consistently involved in games than he used to be -- and coach Carlo Ancelotti has cited his best quality as being his willingness to keep trying, even when things don't come off. It wasn't his most effective night, but his efforts still deserve recognition.

David Alaba has settled quickly into the Real Madrid backline, but this time it was his centre-back partner Militao who caught the eye. He's good on the ball, and increasingly happy to get involved further up the pitch in the final third. There are still question marks about Madrid's defence -- and here they faced an Osasuna side happy to sit back -- but there were more signs here that Alaba and Militao could form a duo who can replace, if not live up to, Sergio Ramos and Raphael Varane.

Camavinga's flying start to life at the Bernabeu has been somewhat forgotten in recent weeks. The 18-year-old was an unused substitute against Barcelona in El Clasico, with his last start coming on Oct. 3. Here, he had the chance to remind Real Madrid's fans just what an exciting prospect he is. Instead, he had an underwhelming first half, picked up a yellow card and was hauled off at half-time.

Osasuna are an awkward, difficult opponent under coach Jagoba Arrasate and frustrated Madrid here. They arrived at the Bernabeu with a perfect away record of four wins out of four on the road this season. Their negative tactics -- especially some blatant timewasting -- angered the home crowd, but you can't really blame them for being happy to settle for a point at the Bernabeu.

6 -- Ancelotti made three changes to the team that beat Barcelona. Luka Modric was a last-minute absentee, while Lucas Vazquez and Rodrygo dropped to the bench. Dani Carvajal, Camavinga and Marco Asensio came in. The coach didn't hesitate to make a half-time change, introducing Rodrygo for Camavinga, and then a triple change, turning to Eden Hazard, Lucas Vazquez and Marcelo, but those tweaks failed to yield the breakthrough Madrid needed.

Real Madrid were left frustrated by a well-drilled Osasuna side on Wednesday. Getty ImagesPlayer ratings (1-10; 10 = best, players introduced after 70 minutes get no rating)

GK Thibaut Courtois, 6 -- Didn't have much to do, although he maybe got the slightest touch to Osasuna's best chance that fell to Moncayola.

DF Dani Carvajal, 6 -- Working his way back to full fitness, this was a tidy if unspectacular performance.

DF David Alaba, 7 -- Saw lots of the ball. Got forward just before half-time to chip an inviting cross into the danger zone which nobody got on the end of.

DF Eder Militao, 8 -- One optimistic long-range shot in the first half, and joined the attack frequently as Madrid pushed for a goal. One of Madrid's best players on the night.

DF Ferland Mendy, 7 -- Has lots of admirable qualities, is quick and dependable, but doesn't quite bring the flair and goal threat that Marcelo did in his prime.

Chimy Avila's journey to LaLiga and Osasuna: "My body is my life story"13hSid Lowe

MF Casemiro, 7 -- Worked hard, racing back in the first half to break up a Avila counterattack. Went for goal from miles out in the later stages.

MF Toni Kroos, 7 -- Kept the ball moving as Madrid dominated possession. Worked hard off the ball too, chasing back in the second half to dispossess Kike Garcia.

MF Eduardo Camavinga, 5 -- Played on the right of the midfield three. Put one early misplaced pass straight out of play. Was booked for a clumsy challenge and didn't seem to play with any sense of caution afterwards, leading Ancelotti to take him off.

FW Marco Asensio, 6 -- Contributed off the bench against Barcelona and was rewarded with a start here, but didn't play well. Switched to a midfield role in the second half.

FW Vinicius Junior, 7 -- Looked confident again. Some early runs at the Osasuna defence got the crowd going. Almost scored with half an hour gone, his shot just needing a little more curl.

FW Karim Benzema, 7 -- Looked more dangerous as the game went on with a number of second-half chances. Couldn't add to his nine league goals this season.

FW Rodrygo, 6 -- Played 45 minutes, on for Camavinga. One dangerous cross-shot.

FW Eden Hazard, 5 -- Ancelotti has warned him he prefers alternatives right now and he did little to change that here.

FW Lucas Vazquez, 5 -- Came on at right-back, where he impressed against Barca, without doing much.