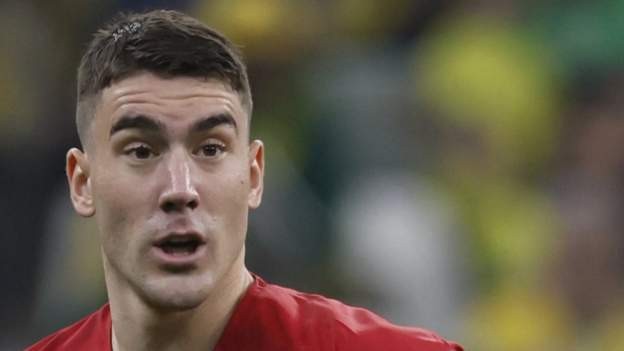 Dusan Vlahovic is set to partner Aleksandar Mitrovic in Serbia's attack for their second World Cup group match against Cameroon.

Forwards Eric Maxim Choupo-Moting and Bryan Mbeumo are both set to start for Cameroon.

However, midfielder Olivier Ntcham has been ruled out of the rest of the Indomitable Lions' group matches.

Serbia are bottom of the group after a 2-0 loss to pre-tournament favourites Brazil, while Cameroon's 1-0 defeat by Switzerland means the African side are still seeking their first victory at a World Cup finals since 2002.

A loss for either team, combined with a draw between Brazil and Switzerland later on Monday (16:00 GMT), would see them exit the tournament with a match remaining.

After watching Serbia against Brazil I am not very impressed by Statman Dave's leftfield pick for Serbia to win the World Cup.

I don't think they will beat a pretty average Cameroon side either.

Serbia have lost both of their previous World Cup games against African sides, doing so against Ivory Coast in 2006 (2-3) and Ghana in 2010 (0-1).Cameroon have lost their last eight matches at the World Cup, with those defeats coming across four tournaments (2002, 2010, 2014 and 2022). Defeat against Serbia would equal the longest-ever losing run by a nation at the World Cup, set by Mexico between 1930 and 1958 (Nine in a row).Serbia have conceded in eight of their 10 games at the World Cup, shipping at least two goals in six of those games. However, they have won both games in which they've managed to keep a clean sheet.Cameroon have won just one of their 15 World Cup matches against European opponents (Drawn five, lost nine), a 2-1 win over Romania in 1990. They are winless in 12 games since (Drawn three, lost nine), with Rigobert Song playing in six of those winless games and managing them in the 1-0 defeat to Switzerland.