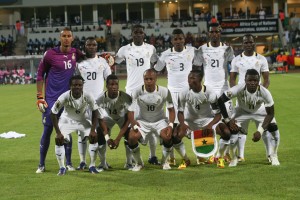 Ghana coach Goran Stevanovic has made two changes to his squad that will face Guinea on Wednesday night at the Africa Cup of Nations as Isaac Vorsah and Samuel Inkoom have been named in the starting line-up.

The Serbian is searching for the right formula at the Africa Cup of Nations and has played with different set-ups for his group matches.

John Boye has retained his position as centre-back.

John Pantsil will act as captain in the absence of John Mensah who failed to win the fitness battle from a thigh injury.

In the absence of Muntari, Andre Ayew will play on the left wing while Kwadwo Asamoah will take the hole just behind striker Asamoah Gyan.

What do you think about Ghana's starting line-up to face Guinea?