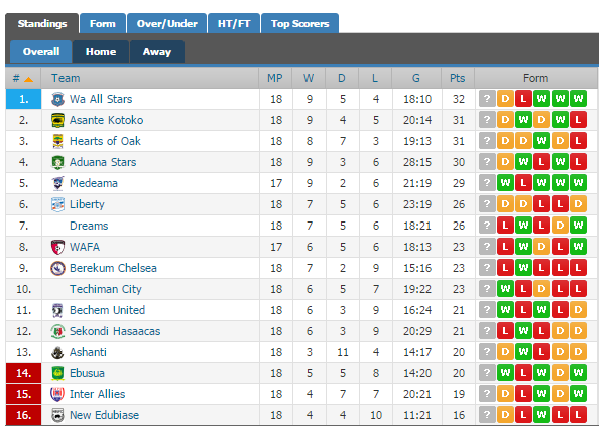 The race for the Ghana Premier League has intensified with the top four teams - Wa All Stars, Kumasi Asante Kotoko, Accra Hearts of Oak and Aduana Stars - separated by only two points after match day 18 on Sunday.

Below is a review of the weekend's action;

The Ghana Premier league leaders, Wa All Stars were unable to extend their advantage at the top of the table following a goalless draw with Ashantigold in Wa.

Ebusua Dwarfs eased their relegation fears with a 2-0 win over Sekondi Hasaacas at the Robert Mensah stadium in Cape Coast.

Both goals were scored from the penalty spot by former Ghana U-20 defender Christopher Bonney.

Accra Hearts of Oak were held to a 0-0 draw by visiting Aduana Stars at the Accra Sports stadium.

The tie saw Burkinabe goalie, Soulama Abdoulaye return to the Hearts starting 11 for the first time in two months since his howler against bitter rivals Asante Kotoko in the first half of the season.

CAF Confederation Cup campaigners, Medeama SC won their ninth league match of the season with a 2-1 victory over Dreams FC at the T&A Park.

Akwesi Donsu and Emmanuel Preprah scored the goals for Medeama while Aaron Amoah grabbed a consolation for Dreams.

New Edubiase and Liberty Professional shared spoils in their behind closed doors match at the Obuasi Len Clay Stadium.

The Brong-Ahafo regional derby ended in favour of Bechem United who beat their neighbors Berekum Chelsea 2-0.

Ernest Baffoe and Solomon Mensah scored the goals for Bechem in the grudge match held at the Bechem Park.

Earlier on Saturday, Kumasi Asante Kotoko and Inter-Allies played-out a 1-1 draw at the Tema Stadium.

Scores at a glance