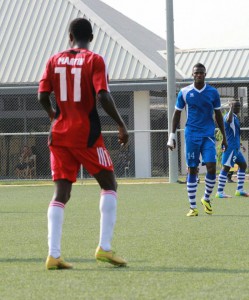 The Academy boys will host the dethroned league champions in a much talked-about duel at the Red Bull Arena in Sogakope.

Last season, WAFA stunned Asante Kotoko by a lone goal courtesy Majeed Ashimeru’s second half strike And Martin Antwi who played a part in that game is eyeing another victory over the Porcupine Warriors.

“We know Asante Kotoko is one of the biggest clubs in Ghana and playing against them, you have to prepare very well. But on Saturday we hope to beat them,” Antwi told Ghanasoccernet.com ahead of Saturday’s game.

“It is going to be a tough game but we are playing at home. We have the needed home advantage to shock Asante Kotoko and that is what we are going to do because we have a good bench.” He added.