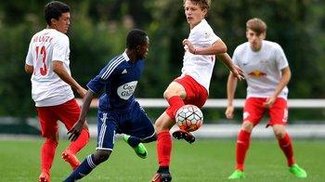 WAFA SC U16 side failed to reach the quarter-finals of the 2016 Next Generation Tournament after losing their opening two matches.

Coach Sadiq Abubakar Yakubu’s side began their campaign with a 3-0 to Red Bull Leipzig at the Red Bull Football & Ice Hockey Academy in Liefering.

Their second game also ended in a 3-0 defeat to Spanish side Valencia who spent almost the entire game with a man advantage.

Ransford Darko was sent off after two minutes and the Spaniards converted a penalty to take the lead.

WAFA tried to play their part but were unable to convert the chances that came their way.

Valencia were much more effective, and they added two wonderful goals in the second half for the 3-0 win.