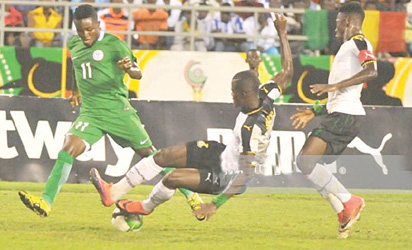 Nigeria’s home-based Eagles Sunday, suffered a 4-1 humiliating loss to Ghana in the final match of the 2017 WAFU Nations Cup.

Playing in front of a capacity crowd at the new Cape Coast Stadium, the home-based Eagles, who had defeated Ghana 2-0 in a group game last Monday, were completely taken apart, shred into pieces, dismantled, offering little in attack to suffer their first and worst loss in the regional tournament hosted by Ghana.

To say that the coach Salisu Yusuf-trained Nigerian side played like lightweights is an understatement as the Black Stars relentlessly ran rings round their midfield, comprising Ifeanyi Ifeanyi, Afeez Aremu, Rabiu Ali and Peter Eneji, who all looked helpless.

From the start of the game, Ghana  burst into the action, asking all the questions as the Nigerians retreated into their cocoon, which inadvertently, led to their destruction, as they allowed the hosts to dictate the pace, pattern and pendulum that the game eventually swung to.

As early as the 18th minute, Ghana’s Kwame Kizito almost broke the deadlock as he took on two defenders but his shot ricocheted off Aniyikaye Adeleyi, allowing goalkeeper Ikechukwu Ezenwa to breathe a sigh of relief.

By far the more impressive side on the day, the Black Stars continued attacking with pace and defended with grit as the Super Eagles found it difficult to create any clear cut chance, save for Rabiu Ali’s 30th minute strike which deflected off Samuel Sarfo.

And on 43 minutes, it so happened that Sarfo, was the one to open the floodgates of goals for Ghana as he edged the hosts ahead with a clinical finish, as he  calmly controlled the ball on the edge of the box, beat three markers and fired in a low shot that goalkeeper Ezenwa had no answer for.

Ghana doubled their lead on 57 minutes, when   Vincent Atinga expertly converted a penalty kick after substitute Patrick Razak, was  tripped down in the Nigerian  box.

Two later became three for Ghana on 77 minutes as Stephen Sarfo scored his second of the night off a penalty kick after Razak was  hacked down by defender Stephen Eze.

And Ghana fans were taken into  fourth heaven on 93 minutes when Winful Cobbinah scored Ghana’s fourth of the night after a nice pass from Patrick Razak.

With their wings clipped, Nigeria finally got a consolatory goal on 95 minutes, as Rabiu Ali’s free kick beat Joseph Addo at his near post.

Speaking at the end of the game, Nigerian coach, Salisu Yusuf said, “We lost to a good team, which is a good lesson for us. The tournament was good. The boys did well throughout the tournament but its sad that they lost at the end but that is the way the game is”.

Niger beat Benin to  win bronze medal Also a goal in each half from Idrissa Halidou and Victorien  Adebayor handed Niger the bronze medal at the 2017 WAFU Cup of Nations after beating Benin 2-1 in a third/fourth place play-off match at Cape Coast Sports Stadium yesterday.

It was a slow start from both teams with the first shot on goal coming in the 12th minute courtesy of Benin’s Charbel Gomez, but his 22-yard pile-driver was brilliantly saved by the keeper.

Ten minutes later Niger had their first sight on goal when Boubacar Magid met a corner-kick with a strong header, but his effort went just over the target.

On the half hour mark the Menas took the lead when Idrissa Halidou met a low right-wing cross from Boubacar Hainikoye and expertly turned the ball home from 12-yards out, 1-0.

Niger finished the half the stronger of the two sides with Victorien Adebayor almost doubling their lead two minutes before the break after meeting a cross from the left with a thunderous 14-yard volley, but his effort shaved the wrong side of the crossbar.

Ten minutes into the second half Benin were the first to threaten, but Charbel Gomez saw his 22-yard free go just over the target.

Ten minutes later Charbel Gomez was in the thick of the action again with another powerful long range shot which the Niger keeper spilled into the path of Jacques Bessan, but he fired wide from close range.

The final 20 minutes saw Benin push forward in search of an equaliser and in doing so left themselves exposed at the back, a fact Niger took full advantage of with a counter-attack in the 85th minute which saw Victorien Adebayor find the back of the net, 2-0.

Benin did find some consolation in the dying seconds of the game when Nabil Yarou poked the ball home following a goalmouth scramble, 2-1.