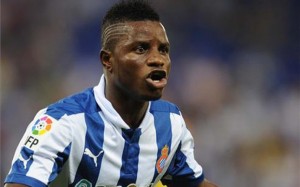 Wakaso is in excellent form in Spain

Ghana midfielder Mubarak Wakaso was the hero as he scored a classy goal and set up another as he returned from suspension to help Espanyol beat Osasuna 2-0 in Spain on Sunday.

The Black Stars midfielder, who was returning to action after serving a one-match ban, went on at halftime to set up one goal and score another.

Wakaso's heroics helped his club to move out of relegation danger as he returned from serving a suspension for accumulated yellow cards to boost their tottering campaign.

After Sergio Garcia had forced Osasuna goalkeeper Andres Fernandez to push his strike onto the crossbar, Espanyol broke through in the 51st when Hector Moreno headed in Wakaso's out-swinging corner.

Wakaso sealed the victory with Osasuna searching for the equalizer in stoppage time when he went past Fernandez outside the area and floated the ball home from a tight angle.

Watch video of Wakaso's goal below