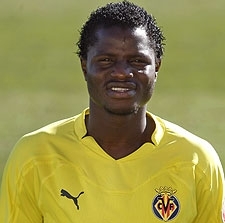 Midfielder Wakaso Mubarak was a second half substitute as Barcelona laid down the marker on the defence of their Spanish title with a 5-0 thrashing of Villarreal on Monday night.

The 20-year-old replaced Ruben Gracia Calmache on the 59th minutes when the away side was already down 3-0 at the Nou Camp.

Wakaso was shown the yellow in the 84th minute for arguing with the referee after he fouled Mascherano.

He was recently offered a three-year contract extension for his sterling performances for the Yellow Submarines.

Villarreal will play in the group stages of the Uefa Champions League this season.