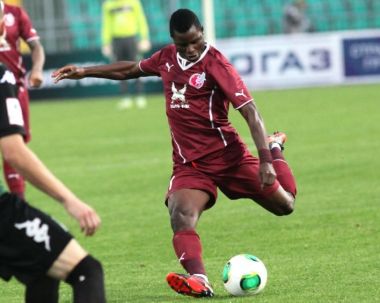 Mubarak Wakaso has hit his best form just in time for Ghanaâ€™s crucial 2014 World Cup qualifier against Egypt by scoring his debut goal for Rubin Kazan on Sunday.

The ex Espanyol man is one of the key players called up by Black Stars coach Akwasi Appiah for the crunch first leg of the playoff tie against Egypt on October 15 in Kumasi.

Wakaso scored the first of Rubinâ€™s 3-0 win on the big Russian derby against Anzhi Makhachkala.

The tireless midfielder scored with a trademark effort after just 11 minutes to light up the Central Stadion.

Ruslan Mukhametshin then out the result beyound doubt with Rubin's third in the 70th minute to cap an excellent performance by Kurban Berdyev's side.

Wakaso's importance to the Rubin team manifested late in the game as Anzhi pulled one back in the 85th minute - 13 minutes after the Ghana internationalÂ was replaced.

The Tartars however scored two late goals through Azmoun and an own goal from Eremenko to seal an emphatic win over Anzhi who will remain bottom of the Russian League after 12 rounds of games.