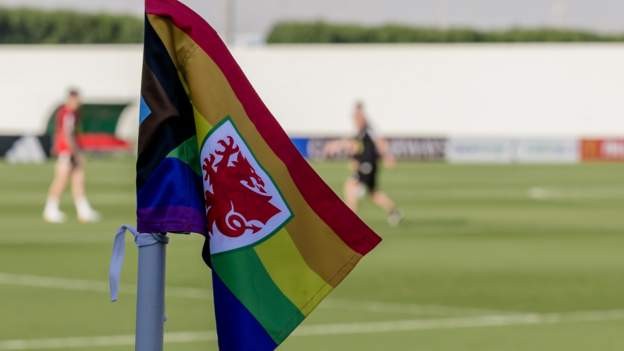 Wales had the rainbow flag on prominent display at their training base in Qatar on Wednesday, sending a defiant message to World Cup organisers.

There were pre-tournament promises that teams and fans would be able to show support of LGBTQ+ rights in the Gulf state, where homosexuality is illegal.

But a last-minute U-turn saw captain Gareth Bale warned against wearing a OneLove armband or he could be booked.

That has included former Wales captain Laura McAllister who was told to remove her rainbow bucket hat as she attended Wales' opening 1-1 draw against the USA.

McAllister, the former Sport Wales chair and Fifa council candidate, is gay and said the security at the stadium was "heavy handed. It was quite intimidating".

A professor at Cardiff University's School of Law and Politics, McAllister is also currently board director at the Football Association of Wales Trust and deputy chair of Uefa's Women's Football Committee.

Football's world governing body Fifa has threatened bookings for any players who wear the rainbow armbands.

Bale was among a group of seven European national captains who had planned to wear the armband to promote diversity and inclusion.

Wales had planned to wear the OneLove armband, along with England, Germany, Belgium, Denmark, the Netherlands and Switzerland.

The Football Association of Wales (FAW), which has requested a meeting with Fifa over the incidents, had said: "We're frustrated. We're disappointed.

"But we remain with the belief that football is for everyone and stand with our LGBTQ+ members of the Welsh football family."

Alongside Wales' colourful protest - which also saw a large rainbow flag draped from a pitchside tent - Germany also showed their displeasure on Wednesday.

Players covered their mouths during the team photograph before their World Cup opener against Japan "to convey the message that Fifa is silencing" teams, according to head coach Hansi Flick.

No disciplinary action will be taken against Germany and as it stands Wales have not been reprimanded for their stance.

The Dragons are next in action on Friday against Iran, beaten 6-2 in their opening game by England.