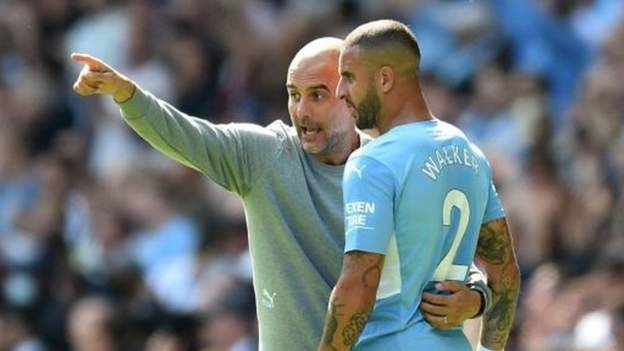 The 31-year-old has been a first-team regular under Guardiola since the former Barcelona and Bayern Munich boss signed him from Tottenham in 2017.

Speaking to BBC Radio 5, Walker praised his manager's influence on his career.

"He is the one who has made me understand football so much better," he said.

He added: "Do I think I could have played in a back three five years ago? Definitely not. I think my understanding of the game, my knowledge of the game - where the press is going to come from, learning to go into the midfield, to balance it off people, come in to receive the ball at the correct angle. So many little things you don't really hear of."

In a wide-ranging interview on the Friday Football Social, Walker covered many subjects - from his team-mates, the difference between Guardiola and England boss Gareth Southgate and how long he hopes to keep playing football.

During his time at Manchester City, Walker has won the Premier League three times, the League Cup four times and the FA Cup once.

He came close to adding Champions League and international success to that list this year, but City lost to Chelsea in the Champions League final in May before England were beaten by Italy on penalties in the Euro 2020 final.

"I had just lost the Champions League final as well, it was a tough one to swallow and probably one of the lowest moments, definitely, of my career.

"We scored an early goal. I remember running with my arms out and I thought we are going to actually do this. I believed in us, I believed in the manager, the players around me on the field and the subs who could come on.

"You get to the end of it and it is the flip of a coin. Every one of the lads who came on and took a penalty I take my hat off to them, I don't think I could have done it. To let someone down is my biggest fear.

"It is football and it happens and we had to move on."

England have not won a major trophy since 1966 but do not have to wait long for another opportunity to win silverware with the World Cup taking place in Qatar next year.

Walker is hopeful he can go one better for club and country after they fell just short this year.

He added: "The owners have invested so much into the club, for them to win the Champions League would be massive and for us as players, I don't think anyone has done it. That says a lot. Now we have been to the final it is ticked off and next is to win it.

"It is the same same for England. We'd reached the final, now I want to go lift the trophy at the end, if it is the Champions League or the World Cup.

"I don't want to stop winning. Once you get the bug of walking up the steps to Wembley or lifting the Premier League trophy, it's addictive and I want to keep doing it for as long as I can."

'As long as I'm enjoying it I'll keep doing it'

Walker will be 32 by the time of the next World Cup but the former Sheffield United player says he has no intention of retiring from football anytime soon.

"I'll go until my legs don't want to go," he added. "Until they go I'll keep running.

"I made it very clear I want to go back and play for Sheffield United. I started there, played there from when I was six or seven years old.

"If I am dropping down and it is becoming a burden obviously not, but as long as I am still enjoying it I'll keep doing it. I love the banter with the lads. There is never one day I think I don't want to get out of the bed.

"As soon as that stops I will stop."